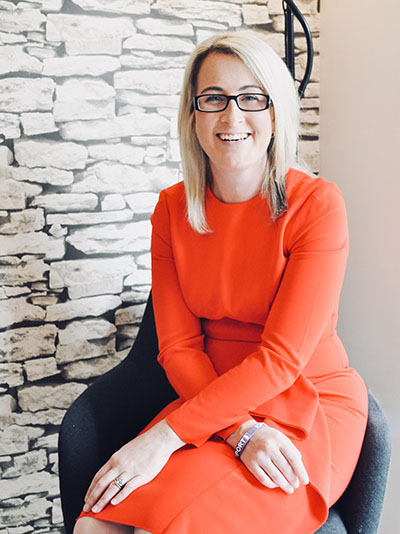 The symptoms of ICP vary from woman to woman; however, the most common is itching – which Natalie describes as ‘uncontrollable, relentless and torturous’. Natalie’s symptoms presented as warmth before moving on to itching, which intensified towards the evening. She also felt lethargic and generally unwell during the time leading up to diagnosis. Natalie was diagnosed with ICP within 24 hours of the symptoms manifesting, despite being told at the local Maternity Assessment Unit that itching in pregnancy was ‘normal’. She was informed by a midwife that ICP was not hereditary, when extensive research suggests otherwise and was also faced with the misconception that ICP was not linked to stillbirth.

While many women may be told that the symptoms of ICP are ‘normal’ during pregnancy, after assessment, Natalie ended up being hospitalised during her first pregnancy due to elevated levels of alanine aminotransferase (ALT), which can indicate liver damage, and high bile acids. Ursodeoxycholic acid and chlorpheniramine were prescribed to Natalie, but while the former managed to reduce her bile acids, neither relieved the itching. At this point the symptoms of ICP became debilitating for Natalie: ‘I spent the nights scratching my legs and chest raw with a wire hairbrush and rubbing my feet against the end of the hospital bed. 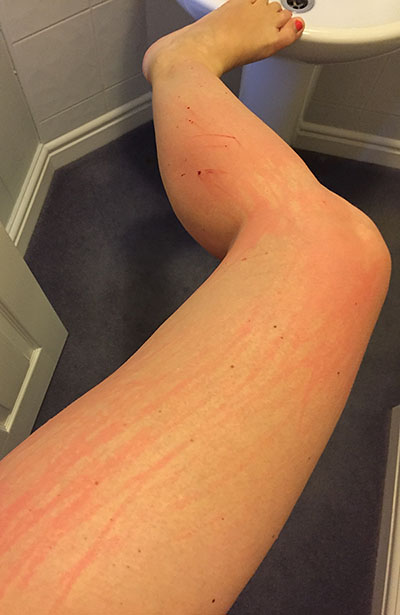 I would sit on the bed with my legs dangling for hours on end, with my feet resting on a chair whilst I itched away against a towel and a hairbrush. The only sleep I got was when I was so exhausted I didn’t have the energy to scratch’. The lack of sleep caused by the constant need to scratch caused Natalie to become exhausted, leading her unable to confirm her full name to medical staff.

‘I was hospitalised for five days from diagnosis with my first pregnancy’, recalls Natalie. ‘Whilst in hospital I was attached to an CTG (cardiotocograph) machine to monitor the baby’s heart rate, and provided blood samples daily to check my liver blood test and bile acid levels. Once discharged, I attended the hospital weekly for a check-up with my consultant and visited my local GP surgery twice a week to give blood samples for monitoring. The only sleep I got was when I was so exhausted I didn’t have the energy to scratch I was grateful that my local GP surgery agreed to do this, as I was having to drive a 60-mile round trip each time to provide blood before this agreement was made. In addition, I saw a midwife every couple of weeks to check the baby’s growth and my general well-being’. 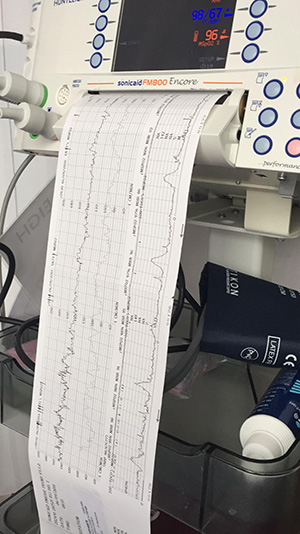 Natalie’s second pregnancy was very different, however: ‘I attended the Day Assessment Unit at the hospital for twice weekly monitoring of bloods and CTG. I was admitted overnight after my bile acid and ALT levels radically increased and saw a consultant weekly to review my management plan’.

An important factor in pregnancy that many forget is being able to enjoy the time spent with the baby in utero. Due to all of the symptoms and exhaustion caused by ICP, Natalie found it extremely difficult to enjoy being pregnant, especially due to the slightly higher risk of the child being stillborn. ‘I was constantly asked by healthcare professionals if I could feel the baby move’, reports Natalie: ‘The magical moments of low-risk pregnancies had become a trigger of paranoia’. Natalie also experienced strong feelings of vulnerability and isolation, especially when alone. She also suffered Post-Traumatic Stress Disorder after the birth of her first child, which led to her delaying trying for a second.

As medication had proven unsuccessful in relieving the itchiness of ICP, Natalie told us of some home remedies that may help others with similar symptoms: ‘Being slightly more informed (and prepared) for my second pregnancy, I was less ruthless to my body. 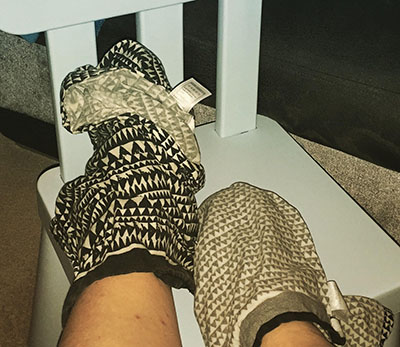 I would wet tea towels (left in the freezer) to wrap around my feet and legs at night. I borrowed an industrial fan for the bedroom from a relative and soaked my feet in ice-cold water before I tried to get to sleep at night. I had endless cold showers and used a foot file to ease the burn of the itch when I needed to scratch them – I had pretty smooth feet by the time my daughter arrived!’

Natalie was lucky to have a close network of friends to help support her journey through ICP. However, it wasn’t always plain sailing, as the lack of information about ICP meant that not everybody could relate to or understand the symptoms, the effects or the condition itself: ‘It was difficult to share my diagnosis with those outside of my close network of friends first time round. In fact I didn’t even tell many relatives. 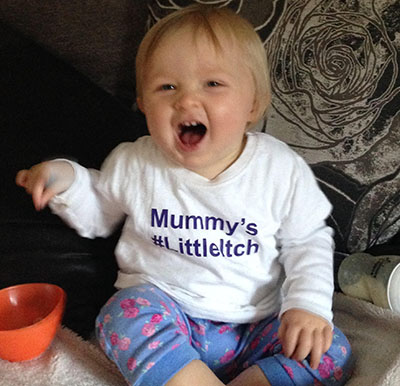 I knew very little about the condition and generally had to take each day as it came (mentally and physically). I felt like I was extremely vulnerable and didn’t want people to think I couldn’t cope with being pregnant. My bile acid and ALT levels fluctuated frequently and I was often in and out of hospital as the severity of my case worsened. With my first pregnancy, even my consultant spoke to other consultants in the UK for advice. It was before I knew about the work of ICP Support and I had to place all of my trust in his decisions’.

‘There was also an issue of pride’, continues Natalie. ‘Three of my best friends were also pregnant at the same time and I could not relate to their experiences and didn’t want to show any signs of weakness.’ She courageously admits that being diagnosed with ICP affected her marriage: ‘My husband struggled to understand why his friends’ wives hadn’t been through similar experiences. He didn’t know how to help me, and during the second pregnancy we had a toddler to look after too, which was difficult as I wasn’t sleeping and my husband had to work’.

When discussing the condition with female family members, Natalie soon discovered that both her mother and grandmother had experienced ICP-like symptoms during their pregnancies. However, neither had been diagnosed, as the condition was unheard of at this time (1980s/1950s, respectively). This supports the research that suggests women with a mother or grandmother who experienced ICP during their pregnancies are more likely to experience ICP themselves. Natalie’s mother in fact had three ICP pregnancies. Her grandmother also had three, one of which unfortunately resulted in one of the babies being stillborn. ICP Support works to ensure that every ICP baby is born safely.

ICP Support is the only charity in the UK dedicated to women experiencing ICP; they support women by providing advice, research papers and articles about the condition, and also fund research into the condition to ensure all mothers and babies are happy and healthy throughout pregnancy, birth and beyond.As soon as I found out I was pregnant I joined the Facebook group ‘Towards the end of my first pregnancy I came across ICP Support’, Natalie told us. ‘I spent some time searching and reading research papers whilst awake from the itching at night and came across the charity’s website. I contacted ICP Support for advice, and shortly afterwards my son arrived. It wasn’t until my second pregnancy that I fully utilised the resources available on the charity’s website. As soon as I found out I was pregnant, months before diagnosis, I read over research papers and joined the Facebook group. I think I knew it was inevitable that I would have another ICP pregnancy.’ Natalie also showed the results of research conducted by the charity to her consultant to ensure they knew as much as possible about the condition. 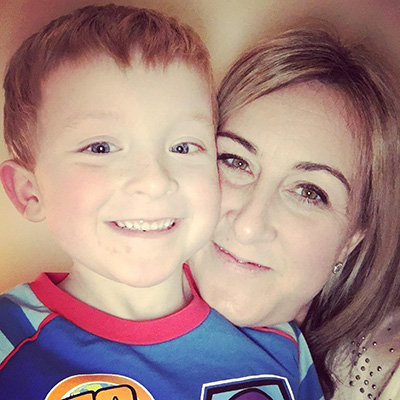 ‘The Facebook support group was particularly helpful’, continues Natalie. ‘Seeing other women suffering and posting during the night (when I couldn’t sleep) made me feel less isolated and more empowered. I also found myself offering encouraging advice to other ICP women, particularly those experiencing ICP for the first time. I developed a relationship with the CEO and Founder of ICP Support, Jenny Chambers, who dedicated time to help me through my recent pregnancy. She responded to each and every question of concern with advice backed by research. Night and day – email or telephone. It was a level of support that without which I am not sure that I could have coped. Knowing that she had also consulted with her Professor, Catherine Williamson, on occasions about some of the advice I had received from my hospital, it reassured me that it was OK to question those looking after the health and well-being of both me and my baby. A lot of ICP Support volunteers have experienced ICP themselves, with all advice coming from them both professional and compassionate.’

Natalie bravely admitted that without the support of the charity, she would not have been able to cope with the last few weeks of her pregnancy: ‘I’m not sure I could have gotten through it. The ICP Support team became our family and helped my husband to understand how best to support me. I would not have sustained my health or sanity without access to the charity’s research-based information, experienced advice and ongoing support (no matter what time of day or night!)’.

Natalie has contributed to the charity in various creative ways since her diagnoses, including partaking in research (Obstetric Cholestasis Research Study, October 2016, and Metabolic Profile in ICP & GDM Study, September 2017), hosting an afternoon tea, running a 10k course in Manchester and selling merchandise on behalf of the charity. She has generously raised almost £1500 for ICP Support, which will go towards further research, providing support for those affected, and raising awareness both within and outside the medical field.It was a level of support that without which I am not sure that I could have coped Natalie agrees with where any money raised will go, but also suggests another route: ‘Some research into the mental and emotional effects of women diagnosed with the condition’. It may be easy to forget how draining and uncomfortable it is to endure such a condition in what should be an enjoyable time for both mother and baby.

Going forward, Natalie would like to see some progress made for future sufferers, especially as her daughter may also have to deal with ICP: ‘I would have been supported more if I’d have had more consistent care from my hospital. I believe all hospitals should make pregnant mothers aware of the condition, as well as offering some specific post-natal care for ICP sufferers’. Natalie hopes her story will help other mothers-to-be, and leaves some tips for sufferers on how to manage the condition: