It was 1976 when Andy Edgecombe had her stillborn baby boy, and no one knew why. She had to wait another 25 years to get any answers.

A proud mum of two grown-up children and a granny to four cherished grandchildren, she is now a staunch supporter of ICP Support, working to raise funds and much-needed awareness.

‘I was sat in the doctor’s waiting room reading a magazine with Jenny in it, talking about itching in pregnancy and her story – and suddenly it all felt into place.’

‘It was a complete fluke that I happened across Jenny’s article that day, but as soon as I read her words, I recognised the symptoms she was talking about. I’d experienced severe itching in my first pregnancy too, but the doctor didn’t know what it was. She gave me some cream to try and soothe it, which did next to nothing. And then at 38 weeks, we lost our baby boy. 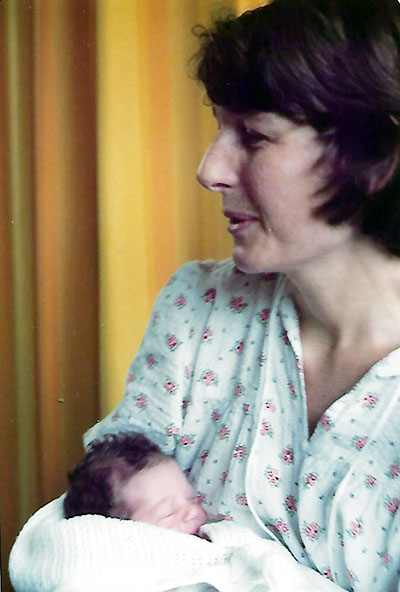 ‘So to read Jenny’s story about her two stillborn daughters 25 years later was – quite simply – a life-changing moment for me. I was waiting to go in to see my doctor, and when I got in the consulting room, I blurted out ‘I think I know why my baby died in 1976’. He looked at me slightly strangely, to say the least.’

After leaving the doctor that day, Andy immediately contacted Jenny Chambers, whose number was at the bottom of the article. And the first thing Jenny advised her to do was to try to get hold of her hospital notes.

‘By a stroke of luck, it was just before the 25-year time limit when hospitals no longer have to legally retain records, so they still had mine on file. I took them straight to my GP and he scoured them like a detective, looking for anything that might indicate I’d had ICP. And then he found it: a blood test that had been run to check my liver. So, in fact, my gynaecologist must have had a suspicion that my itching was liver-related. She just didn’t know what it was, or that there was any risk to the baby, because ICP hadn’t been named as a condition then.’

It is now thought that many women had stillborn babies due to ICP before anyone knew what it was. Andy’s first baby is thought to be the earliest retrospective diagnosis of a stillbirth caused by ICP in the UK. She subsequently went on to have two healthy non-ICP pregnancies and her children have gone on to have two children each themselves.

‘My daughter Charlotte was born 18 months after my first pregnancy, and my son Samuel two and a half years after that. I was lucky to escape the itching in both those pregnancies, as research shows around 80% recurrence of ICP in subsequent pregnancies.’

Andy first met Jenny at a research conference on obstetric cholestasis (now referred to as intrahepatic cholestasis of pregnancy, or ICP) in 2006. Later in 2012 she was asked to become one of the first trustees when Jenny launched ICP Support, and around this time she learnt about the genetic link, which means that sisters and daughters of affected women have a higher risk of developing the condition.

‘When my daughter was about to get married, I took her to Paris as a treat – and, over a meal and a lot of red wine, I told her about the potential risk. She took it in her stride and didn’t seem too worried. She then fell pregnant and at 36 weeks, happened to mention feeling mild pins and needles on her hands and feet. Because of the ICP link, I knew that could be it, even though it wasn’t severe, so I urged her to request a liver function and bile acid blood test. Sure enough, she was diagnosed and induced a week later, thankfully with no adverse consequences.’

Her daughter’s experience prompted Andy to do a 200-mile sponsored bike ride in 2009, visiting seven hospitals in East Anglia, to raise awareness and funds for research. For the 30th anniversary in 2021 she did a sponsored pram-push in her village in Suffolk.

Reflecting on the loss of her baby boy, Andy describes how hard it was for women back then, the way stillbirth was dealt with.

‘We didn’t get a chance to hold our baby, and I experienced postnatal depression afterwards with no counselling offered until my next pregnancy. So things are a lot, lot better now, in terms of understanding and support.’

‘I was lucky to escape the itching in both those pregnancies, as research shows around 80% recurrence of ICP in subsequent pregnancies.’

‘It took me 15 years to feel brave enough to ask the hospital where Joseph was buried (we didn’t give him a name for many years). But we decided to hold a funeral on the 20th anniversary of his birth and death, which was hugely helpful. I had my two children and my life by then, of course, but there was always a feeling inside me that something wasn’t quite right. So to be able to mark his existence, with my family there, has helped enormously.

‘Things have come a long way since I had Joseph. There’s no doubt about that. The support was non-existent back then. Now women have this amazing resource and support network, thanks to Jenny and the research that’s being done. But there’s still more to do, to understand why this illness happens, and to raise awareness with pregnant women, midwives and the medical profession.

‘Things have come a long way since I had Joseph. There’s no doubt about that. The support was non-existent back then.’

‘I’ve tried to turn my experience into something positive, by raising funds – and as mothers, we need to be aware of the genetic link and be proactive about it. My daughter only had mild symptoms and if it wasn’t for my knowledge, it may not have been picked up. So it’s imperative we keep getting the message out there. My hope, of course, is that eventually the research will lead to more effective treatments for the itching, and ultimately protect women from losing their babies to this condition.’