Made in China, produced in Hong Kong and brought up in the UK, Bill Hague has been working for the last 30 years in Obstetric Medicine at the Women’s and Children’s Hospital (W&CH) in Adelaide, South Australia. After undergraduate training at Trinity College, Cambridge and St Thomas’ Hospital, London, he did postgraduate training in Cambridge, Sheffield and London, in particular with Professor Michael de Swiet at Queen Charlotte’s Hospital, London, with specialist qualifications in both Internal Medicine and Obstetrics and Gynaecology.

The service he has helped to build up at the W&CH is recognised around Australia and overseas for its quality and commitment. His clinical service work, teaching and research achievements were recognised by The University of Adelaide with a promotion to full Professor in November 2011. His contributions include the first robust demonstration of the efficacy and safety of metformin in women with gestational diabetes (the MiG Study) in collaboration with Dr Janet Rowan from Auckland, published in the New England Journal of Medicine in 2008. He founded the Obstetric Medicine Group of Australasia (OMGA), and in 2009 became the first Honorary Member of the Society of Obstetric Medicine of Australia and New Zealand (SOMANZ), following the amalgamation of OMGA and the Australasian Society for the Study of Hypertension in Pregnancy (ASSHP), of which he is a former President. 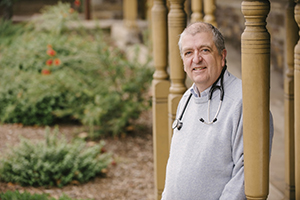 Liver disease in pregnancy has been a particular interest throughout his career, but in recent years he has focused on ICP, with close collaborations with Professor Catherine Williamson and her colleagues in London and Professor Hanns-Ulrich Marschall in Sweden. In 2018, he won a A$1.2 million grant from the Medical Research Future Fund of the Australian Government to organise the Trial of URsodeoxycholic acid vs RIFampicin in severe early onset ICp (TURRIFIC), currently under way (despite issues with the pandemic!) with centres in Australia, the UK, Sweden, Finland and The Netherlands.