Although Lorelle started itching at 28 weeks, she wasn’t diagnosed with ICP until eight weeks later.

‘I was confused and scared as I had no idea what the condition would mean for me or the baby.’

‘I was itching all over my body when I went to my 28-week appointment, not just on my hands and feet. I thought it was heat rash as we were going through a hot spell. My midwife was slightly concerned but not enough to order any bloods. She just said to wait a few weeks to see if it continued.’ 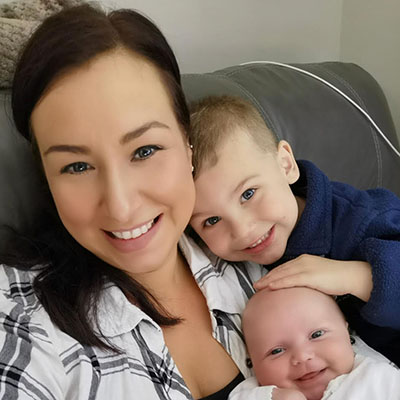 Lorelle was also suffering from high blood pressure and swelling. After going to hospital a few times for checks, she mentioned the itching again.

‘I remember the midwife saying that the enzymes in my liver blood test were raised so they sent my bloods off again. But my blood pressure also continued to rise, so pre-eclampsia was their main concern. I went back and forth to the hospital, and had liver and kidney ultrasounds with no explanation as to why. Until finally, during an overnight stay at the hospital at 36 weeks, I was given the diagnosis of ICP.’

Lorelle described feeling confused and scared, and says her mum was worried, too.

‘The first thing you see when you look online is the risk of stillbirth and that’s a scary thing. We had no idea what the condition would mean for me or the baby. I was in shock, as I didn’t feel I had any support or guidance of what was happening. There were a lot of tears and sleepless nights. Mum was really worried as we didn’t know what it all meant and we weren’t given any information about the condition.’

To make matters more confusing, the information Lorelle was given was different, depending on which consultant she spoke to.

‘One consultant said I needed to stay in hospital from when I received the diagnosis and that I wouldn’t go home until I had the baby. And then another doctor sent me home and told me to come back at 37 weeks. It was all very confusing.’

‘Mum was really worried as we didn’t know what it all meant and we weren’t given any information about the condition.’

In the end, Lorelle was induced at 37 weeks due to high blood pressure, and her son was delivered safely via forceps.

‘It was all quite scary and traumatic, but thankfully he was fine. He did have severe jaundice and had to spend four days in NICU, and also had a problem with his urethra initially, but that was treated and cleared up fairly easily with antibiotics.

‘The hardest part was not knowing what was happening to my body or what potentially could happen to me and my baby. The itching was extremely bad towards the end but overall the tiredness (from the fact I couldn’t sleep because of the itch) was the most debilitating.

‘It would have helped a lot having someone explain the condition to me, or to have been given a leaflet outlining the symptoms and how it’s managed. Family members also need support so they know how to care for their loved one experiencing this condition.

‘I just wish ICP was treated as seriously as pre-eclampsia. It’s scary enough, without women receiving such confusing and inconsistent care. That needs to change.’

Lorelle has just been through a second pregnancy and was fortunate this time to not contract ICP again. Her little girl was born safely at 38 weeks.