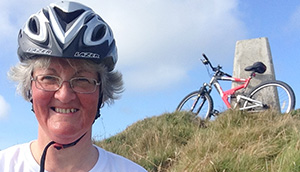 Meet Ailsa Seatter, mother to Gemma and Nana to Iona (aged 2¼). Ailsa has detailed their experiences with ICP at the bottom of this page, but as the first ICP Support case study from a grandparent’s perspective, she would like to share the following thoughts with you.

‘Two and a half years after I first came to hear about ICP, I’ve been looking back at it all and thinking about what it felt like as a grandparent. No matter how old your child, you are still their parent and your instinct is to want to help, and sort things out. But there was nothing we could do. I could listen, and offer (rather useless) advice on keeping cool, and ask ‘is there nothing the doctor or midwives can give you for this?.

No matter how old your child, you are still their parent and your instinct is to want to help‘The hardest part for me was just before Gemma was sent to Aberdeen. She phoned me as someone she could safely moan to. She knew her bile readings were sky high, and that the overworked local hospital wasn’t really aware of just how serious the situation was. I was all ready to go there and have it out with them! But Gemma wouldn’t allow it, explaining how stretched they were, due to staff absences and a higher than usual number of babies being born at that time. I had to stay home, and be quiet and patient – not two of my strengths! It’s only lately, having read the mothers’ Case Studies and advice on ICP Support that I really have a true idea of what she was going through. She hid the worst of it from us, as I suspect she didn’t want us worrying.

‘I really want to be part of preventing others having to go through this!’

My daughter Gemma’s pregnancy was pretty normal until around the six-month mark when she started to complain of feeling really itchy all over. Gemma is prone to itchy skin at the best of times, and takes a daily antihistamine to help counteract this. Ever since she was a teenager, she has always kept hand cream by her side as she hates having dry skin. So at first we all thought it was just her usually itchy skin becoming worse due to her pregnancy.

We live in the Orkney Islands – John O’Groats is south for us! Most people assume Orkney is just one island, but there are many. Gemma lives on the Orkney mainland, but we live 25 miles further north on the island of Westray. This takes 1½ hours by ferry, or 12 minutes on the little 10 seater plane (Westray is linked to its neighbouring island Papa Westray). We get many tourists coming especially to do the latter short hop, as it’s the world’s shortest scheduled flight and is featured in the Guinness Book of Records! The current record is a mere 53 seconds). Because of the distance between us we didn’t see Gemma too often, as we were both working full-time. So we knew that she felt really itchy but weren’t aware just how bad it was.

Over the next few weeks things got worse. At an appointment with her midwife she explained about the itch, bloods were taken and she was confirmed to have ICP – a condition that none of us had heard of! Gemma was relieved to have a diagnosis, but not relieved of the terrible itching, which continued unrelentingly. It was only when we talked to her husband Donald that we realised just how bad things really were. Despite cold showers, medication, and creams, nothing brought relief to her itching. He tried everything possible to help, opening windows for a cool draught in the bedroom, but felt totally helpless watching her lying on the bed in the evenings, with tears rolling down her cheeks assuring him he’d done all that he could, and there was nothing more that he could do.

It was only when we talked to [Gemma’s] husband Donald that we realised just how bad things really wereShe tried to describe it to us, explaining that ‘it’s not like any other itching I have ever had. It’s inside you, it’s everywhere and nothing brings relief’.

We knew by now that Gemma would be induced at 37 weeks. She was due to stop work at 36 weeks. However, things became so bad that she could no longer go to work due to severe sleep deprivation. At 34 weeks her doctor signed her off for a fortnight. At 36 weeks she went for a check-up – her bile acid readings were very high, but the staff weren’t unduly concerned. Gemma called me, explaining that all the information online indicated that anyone with readings that high should be induced, but staff assured her that wouldn’t be happening.

Then the next day she received a call telling her to pack a bag and be ready to catch the 16:00 flight to Aberdeen! After some frantic phone calls, she and Donald both caught the flight and she was induced several hours later. The next day Iona was born at a healthy 6 lb 1 oz. Mother and baby were both fine!

Gemma’s itching subsided about three days later. She explained to me that the midwife always asked ‘Are you doing okay?’, and followed up with ‘Do get in touch if you need any help’. Gemma commented that she was sure the midwives were being vigilant (with all new mothers) to ensure they weren’t experiencing any form of postnatal depression. ‘I know that most mums have the baby blues after a few days, but I’m just feeling better and better every day – I haven’t felt this good in months!’

Iona is now a boisterous 2¼-year-old toddler. When she and Gemma visited in July, she and I discussed what we could do to raise funds for ICP Support, and quickly agreed that a coffee morning was out as we are such poor bakers! I then decided to do 200 miles on my bike in August, and raised £631 plus £110 Gift Aid through my JustGiving page.