After Kate’s itching was dismissed by doctors several times, she was induced at 38 weeks with extremely high bile acids.

‘I burst into tears when we got the results back the next day that confirmed my ICP diagnosis. I was scared but also frustrated that I hadn’t been taken seriously all those months.’

‘I think I was about 16 weeks when I first noticed the itching and mentioned it to my midwife. It was only a little bit on my arms at that stage, and she told me to talk to my GP about it at 20 weeks as I was seeing him then. 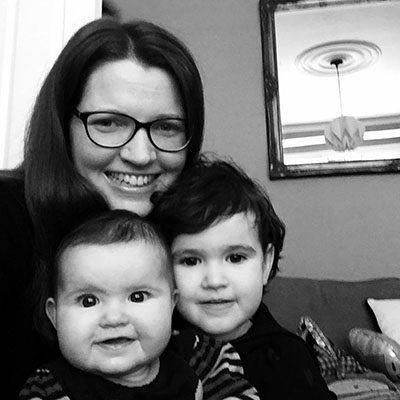 ‘By that point, the itching had got a lot worse and spread to my abdomen and legs. I also had swollen ankles and my doctor seemed much more interested in checking me for pre-eclampsia than doing a blood test for ICP.

‘I’d read up about ICP by then so was asking about it, but he said I’d be jaundiced if I had it (which I know now isn’t necessarily true). So I was sent away with no blood test.’

Kate went on to mention the itching another two or three times to different health professionals, without anyone taking action. And then at 34 weeks, the itching ramped up even further.

‘It was July in London. We were having a heatwave and I was commuting while very pregnant. And the itching was awful. Really awful.

‘Eventually at 38 weeks, at another GP visit to complain about the itch, a different doctor asked why I hadn’t been tested for ICP. If I was itching to the point of not being able to sleep, which I was, then I should definitely be tested for it, she said.

‘I remember bursting into tears when we got the results back the next day that confirmed my ICP diagnosis. I was scared but also so frustrated that I hadn’t been taken seriously all those months.’

Kate was taken in immediately to hospital and induced. But after three days of induction, ten hours of active labour and two hours of pushing, she had an emergency c-section.

‘I was told I was at a greater risk of losing my womb as it had been under so much pressure from the three-day induction, and rushed into surgery, which was extremely scary and upsetting. Thankfully, our daughter Saoirse was born 15 minutes later and came out crying and punching the air like she was doing a star jump – I will never, ever forget that moment! My poor husband also thought I had lost my womb as he saw a big organ on a table, not realising it was the placenta.’

Although traumatised by the way their daughter’s birth had progressed, Kate went onto have another pregnancy a couple of years later, and this time was diagnosed with ICP a lot sooner.

‘My consultant was 100% in my corner. That made such a difference to my experience and having the birth we wanted second time round.’

‘I started itching second time at 12 weeks, and again was dismissed when I raised it with my midwife. She told me people don’t get ICP so early (again, something I now know not to be true). I insisted on going back to one of my consultants from my first pregnancy, the one I had the most confidence in, and I asked her to take on my case, which she thankfully did.

‘My diagnosis of ICP happened almost straight away after that, and my experience of ICP was completely different under consultant care. We made a plan together and booked in an elective c-section again, as my first vaginal birth hadn’t gone well due to the intervention and position of the baby. My consultant was 100% in my corner. That made such a difference to my experience and having the birth we wanted second time round.

‘My advice for any women going through this now is to trust yourself and keep asking for the blood test if you think something is wrong. It’s just a simple test. If it’s not ICP, then great. But if it is, at least you’ll know and you’ll then be in a position to do your research, get advice and decide what to do next about your pregnancy and induction.

‘I’d say it’s really worth educating yourself, too. There’s lots of great information on the ICP Support website. Make sure you have the facts and the up-to-date advice, so you can stand your corner with health professionals if you need to.

‘But hopefully, you’ll find someone like I did in my second pregnancy – a consultant who knows their stuff and is there to support you, to look after your baby, and listen to what you want from your pregnancy and birth.’