Ali started itching at 34 weeks but when she first mentioned it to her GP, she was told not to worry. Thankfully she’d read about ICP online, and took the matter into her own hands.

‘When I first noticed I was itching, it was all over my body (not just on my hands and feet, as can often be the case with ICP). It wasn’t severe, but it was certainly persistent all day and all night. 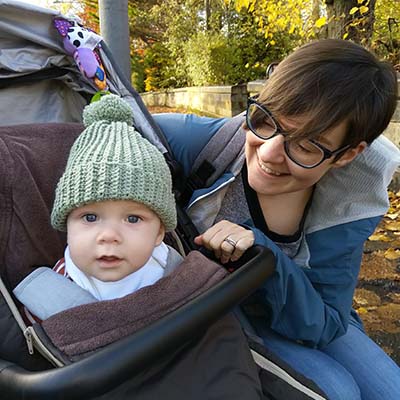 ‘After scratching much more than usual for a few days, I remembered having read something about itching in pregnancy in a handout I’d been given at an NHS antenatal class. I still had it thankfully, and when I read it again I saw it mentioned ICP (previously known as obstetric cholestasis or OC).

‘So I Googled it (of course), and then started to worry.’

Ali made an appointment at her GP surgery that day, explained her concerns and said she’d like to be tested for ICP. But the doctor downplayed the itching.

‘I remember her saying that “some women itch terribly and can’t sleep for weeks – you can’t be that bad!”. She sent me away with a 50 ml tube of cream and said testing could wait until my next midwife appointment in three weeks.

But Ali wasn’t comfortable with that.

‘From what I’d read, if I had ICP I might need to have my baby well before then. So I called my out-of-hours maternity assessment unit that night. They asked me to come straight in, checked me and the baby over, and took bloods to test my liver function and bile acids. Within 36 hours, I was diagnosed with ICP and had been asked to come back in for more tests and to discuss a management plan.’

‘As each result increased, I was called back in for repeated blood tests (and ended up being tested twice a week in the end). I was also given a liver scan to rule out other conditions that could be causing elevated liver function and bile acids.

‘Induction was set for 37 weeks but as my bile acids continued going up, this was brought forward to 36+3.’

‘I wish I’d been signposted to ICP Support while I was going through it as I’d have been much more informed and supported, which would have reassured me a lot.’

Ali’s labour, which she describes as ‘a bit of a blur’, all happened very quickly. Induction was started at 6.30 pm, and after her son showed signs of distress and her waters were broken just after midnight, he was born safely less than an hour later.

‘My symptoms disappeared immediately after Rory was born – and although my itch remained fairly mild, it was a relief to be free from the persistent itchy feeling. I have to say my itch was fairly mild, and stayed consistent, the whole way through my pregnancy.

‘I feel very lucky I didn’t have to cope with the sleep deprivation some other women experience. Having said that, I wasn’t able to ignore the itch and every time I was itchy it reminded me that my baby could be in danger.’

Ali now works for ICP Support as the charity’s Engagement &Development Officer, although she wishes she’d known about them during her pregnancy.

‘I’d have been much more informed and supported which would have reassured me. It can be a very isolating diagnosis.

‘I first became aware of the charity after I’d given birth to Rory, as I was looking for some answers about follow-up care/bloods I might need. When I saw what amazing work they’d been doing to raise awareness, support families and research the condition, I knew I wanted to get involved.

‘I now work with the charity to spread the word about ICP and the charity – to make sure pregnancies are being managed according to the most recent research and to reach more women with the condition.’

‘When I saw what amazing work they’d been doing to raise awareness, support families and research the condition, I wanted to get involved.’

Ali has recently had another child, and developed ICP for a second time.

‘Thankfully my bile acids remained low this time (the highest they got was 18, so just below the diagnosis level recommended by the latest research).

‘I went into hospital at 39 weeks. But due to the labour ward being busy, we didn’t start induction until 39+3. Our daughter Maeve arrived just a few hours later, and despite an extended stay due to jaundice and weight loss, unlike Rory she didn’t need any NICU time.

‘I think the most important thing to note is that my level of itchiness was the same in both my pregnancies, even though my bile acids were vastly different.

‘With Maeve the highest they ever got to was 18, but with Rory they went up to 71 before the doctors wanted to induce.

‘This shows the importance of reporting any itch – even if it’s mild like mine – as the only way to assess the potential risk to your baby is to monitor your bile acid levels.

‘If you’re going through ICP right now, my advice would be to seek as much support and advice as you possibly can.

‘Don’t feel like you’re being a burden or wasting anyone’s time. If you’re concerned for yourself or your baby – get checked out. You may have to push to advocate for yourself and your baby, which isn’t always easy – but don’t forget ICP Support is here to support you.’