Emma happened to be at A&E for another pregnancy issue at 34 weeks when a blood test picked up a liver abnormality. But she was told it was quite normal in pregnancy and sent back home.

‘One midwife was quite dismissive when I mentioned I had suspected ICP. Another didn’t know what it was.’

‘A few weeks later, I couldn’t sleep one night because of the severity of the itch, especially on my feet and ankles. It was horrendous. I was sure it wasn’t normal by that stage. So I rang Triage again and they told me to come in and have some more bloods taken. 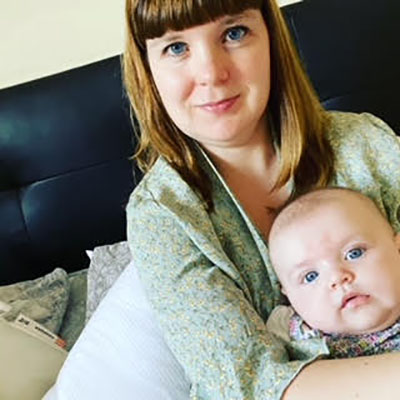 ‘I remember being sat there waiting for the results and a midwife came to check on me. She wasn’t very supportive when I said what I was there for – a bit dismissive, in fact. By that point I’d looked up the condition and knew about the risks, so her reaction was frustrating. We were all very concerned, especially my partner.’

A consultant then saw Emma and told her he suspected it was ICP. And the next day she was called back with confirmation of her diagnosis.

‘From that point, the hospital were thankfully quite on the ball. I had to go in for weekly bloods and had a liver scan, which came back normal. I was given a prescription for some cream and antihistamines. I asked for Urso and they told me they didn’t prescribe it any more, which annoyed me as I knew some women on the ICP Support Facebook group were still being given it.’

Emma described how bad the itch was some nights and that in her case it wasn’t just on her hands and feet.

‘It was all over for me. I was itchy on my ankles, my back, my arms. I tried a few things to cope with it. I had a cold shower before I went to bed and my mum and partner would put my feet in lukewarm water – that helped ease it a bit. My partner put cream on my feet too – he was brilliant. I also felt some pain under my right ribcage, which I understand now can also be a symptom of ICP.’

Emma had been booked in for a planned C-section due to other issues. But at 38 weeks, things took an unexpected turn during one of her hospital visits.

‘I was in the car park about to go in for my weekly bloods when my waters broke. So they put me straight on a monitor to check the baby. She had pooed inside me and they were worried about her heartbeat. So I was taken for an emergency section. Thankfully everything was OK and we were both able to go home the next day.’

Emma was surprised at how little some of the health professionals seemed to know about ICP.

‘I felt like I had to explain it to the people who were looking after me. Midwives need to be better informed about this condition.’

‘I spoke to a midwife on my care team who had never heard of it, which completely shocked both me and my partner. I remember thinking “if they don’t even know what this is, what kind of care am I receiving?”. It didn’t fill me with confidence.

‘I was also surprised the information about ICP wasn’t passed on to my GP. I had to tell my doctor I’d had it when I had bloods taken at my eight-week check. That showed a slight rise in my liver enzymes, so I need to get my bloods checked again in six weeks.’

Despite her ICP experience, Emma is keen to have another child.

‘I know there’s a high chance I will get it again. But I was an only child and I hated it, so we will definitely try for a second at some point. It would be great if there was clearer information and communication about ICP. I felt like I had to explain it to the people who were looking after me. Midwives need to be better informed about this condition.’