Michele’s itch was dismissed by her doctor, but her dermatologist knew what it was straight away.

‘I live in Singapore where it can be really hot and humid, so when I started itching badly at 27 weeks, I assumed that it was my skin reacting to the weather. 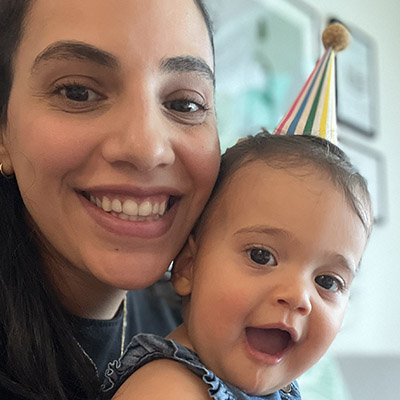 ‘One of my friends has three kids and I asked her lots of questions about pregnancy, including whether it was normal to be super itchy. She advised me to talk to my doctor, who was very well regarded in Singapore.

‘But when I went to see him, he just dismissed my itch and told me it was something that happened to pregnant women sometimes. He gave me some cream to help soothe it, which not surprisingly did absolutely nothing to help.’

Not happy with what she’d been told, and still struggling with her itching, Michele decided to try another route, and went to see her dermatologist instead.

‘He was great, and as soon as I told him my symptoms he said it could be ICP, and tested me to be sure. When my lab results came back, he wrote a letter to my doctor, explaining the situation. He also told me some of what to expect from an ICP pregnancy, such as having to deliver early.

‘I remember leaving that appointment really stressed, mainly because I didn’t know much about it all, and was beside myself with worry that something was going to go wrong.’

Michele started trying to educate herself and find information online. And it was then that she came across the ICP Support Facebook group.

‘It was helpful to find other women going through it too, and to hear their stories, particularly the positive ones – as it gave me hope.’

‘My itch and stress levels were getting worse, to the point of blood and bruises. But it was so helpful to find other women going through it too, and to hear their stories, particularly the positive ones – as it gave me hope that my ICP pregnancy could be OK as well.’

‘It’s very hard when you’re going through a normal pregnancy and then suddenly you’re hit with this news that something serious is happening in your body. So I started reading the Facebook posts religiously – they were my main source of information.’

‘My itch just got progressively more intense. By the end, I was spending all night in the bathtub with ice packs on my body. And with the heat here, it made it even worse I think.’

Understandably Michele wanted to keep her baby in as long as possible, and her doctors were keen to get her to 34 weeks, too. It was challenging due to the severity of her itch. But in the end, Michele made it to 37 weeks.

‘I’m glad we made it to that point. But my body wasn’t ready for delivery at all when we began induction, so it took a few days. I had the foley bulb inserted for 24 hours, and was started with pitocin the day after. My daughter was born safely 13 hours later.

‘The itch went almost straight away, but I still get extremely itchy every now and again.’

Reflecting on her experience, Michele says the hardest part was lack of information and being part of a very clinically focused system in Singapore.

‘It’s so systematic here. The doctors talked a lot about risk and the risk being stillbirth. It was very cold, with not much empathy or support.

‘On a positive note though, when I shared my ICP results with my doctor, the one who’d dismissed me initially, he admitted he’d been wrong – and said he wasn’t aware ICP could happen. So he has changed his practice as a result of my case.’

‘When I shared my ICP results with my doctor, he admitted he’d been wrong – and said he wasn’t aware ICP could happen.’

As for advice for other women going through this, Michele strongly advocates joining the Facebook group.

‘Lean into the support. Read everything you can. I didn’t know anyone who’s had ICP before, so no one really understood what I was going through. So having access to that online community really helped.

‘Also, make sure you know what you want to happen in your pregnancy, and if needed have your partner or a friend with you to help you communicate that to your doctor, if they don’t take you seriously.

‘My situation would have been a lot easier if my doctor had been more informed. I hope over time there will be more awareness – and better treatments. In the meantime, we need to advocate for ourselves – and support one another.’